The club was founded and became independent with their own committee in 1975. The committee and the musicians are all members of the “Stedeker Daansers”. The group consist of 15 boys and 15 girls from the ages from 4 till 7. Every October new children aged 4 till 5 join the group and the oldest ones leave the group. They rehearse every two weeks on a Saturday afternoon and ones a week in the winter months.

Goal of the group
Maintaining traditions, costumes, songs and games from around 1900. Photos and videos are taken so that future groups can see what they did.

Performances
Usually last round an hour and consists of dances, songs and games. They are often asked to perform at old peoples homes, nursing homes and for tourists. The local tourists board ask us to perform on shopping evenings, Christmas markets in Diepenheim area. We have also taken part in many children’s festivals and have travelled abroad. 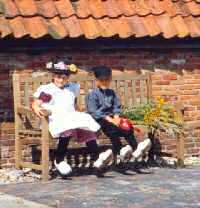 Traditions
Take part every year in the Easter parade and go on a Easter egg hunt by the Diepenheim Castle. In the last weekend of September we organise a party and during this party we go on a parade in a horse and carriage. Everybody is dressed in traditional costume. 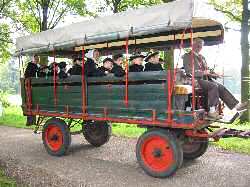 The idea for the children’s group existed 10 years before the group was founded. The founders of the childrensgroup are the Binkers and the Smale families. We placed an advertisement in the local newspaper, "het molennieuws", to find out if children were interested. In no time the group had 30 members and the group trains in the same clubhouse as the "Stedeker Daansers" dancers.

Today
Nowadays we practice in the new club building in Diepenheim. Each year the committee try to get parents to get their children to join the "Krummels" but it becomes more difficult each year. For the children music and dance is good for their coordination. In 2000 "Stedeker Krummels" celebrated their 25th anniversary with a reunion of old members. This took place in a big tent where, during the same weekend, the 6th International folklore festival of the “Stedeker Daansers” was held. The "Krummels" hope to carry on performing to as many people as possible and to keep having fun.