The group is made up of all the members of the dance group who, as well as dancing, want to do something else and still stay involved with the `Stedeker Daansers`. 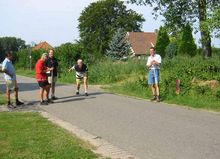 After a competition against the club from Markelo some "kloten" (balls) were ordered. On the Sunday morning of the 7th of October 1979 the first meeting between the two groups was organised. Six members were present. After this meetings took place on the first Sunday morning of the month. This has now been going on for almost 25 years.

In all the years the group takes parts in many competitions, has had indifferent success but everybody enjoy themselves. The "klootschiet"group also organise competition for members of the "Achterhoekse Klootschiet Federatie"(A.K.F). The competitions are divided into different categories such as the open class, per street or neighbourhood and for folklore groups from the east region (F.F.G.N). Furthermore, the group rents equipment out to members and helps other groups who want to learned "Klootschieten".
The history of "Road Bowling"
The first mention of the sport in The Netherlands dates back to 1392. At that time Baron Albrecht van Beieren build a sports complex for "Klootschieten", Archery and a Beugelbaan in the region of Haarlem. During this period "Road Bowling" was a very popular pastime and was firstly called "Cloeten bole" throwing, "Klomp schutten" or "Closcloten". It was invented by Swiss soldiers during a march back to the homeland. We hope to pass on this sport to following generations and hope that people enjoy playing it. 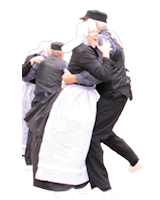